Should Midas have AJAX enablement built in?

The question has come up in the Blogosphere frequently about easier AJAX enablement (e.g., Andrew Tetlaw's Domino's Relevance and the Modern Web).  While we are waiting to see if IBM does something about this in Notes 8 (do you think it is likely?), is there anything that could be added to our Midas Rich Text LSX or another toolkit which would make this happen more automatically?  Since Midas works in R5/ND6/ND6.5/ND7, this would open the fucntionality up to more people, even if Notes/Domino 8 does offer similar features.
As a bit of background, Midas already can add JavaScript and a bit of smart logic to make tabbed tables work better and make sections work better (i.e., when I say "better", I mean without a round trip to the server, but instead just using hidden DIVs and such), so it would be within the realm of believable to have it generate JavaScript to handle an AJAX implementation of an input field or drop down box or something else of the sort.  Alternatively, it could work with something like Dojo to allow tricks like Rob's Big Sexy HTML Post to happen when a caption table was used in Notes.  If you don't know what a caption table is, see Rob's post.  That is exactly how a caption tabel works in Notes, but with no programming.  I bet they would be used in Notes more if they were as easy to translate to the web as that.
So, should Midas offer AJAX widgetry?  Should it offer Dojo integration?  Should it offer something else of this sort?  What do you think? 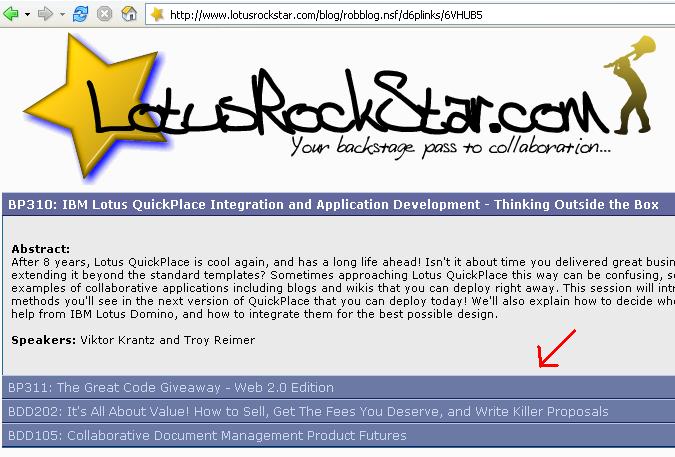 yes and yes. good to stay on the cutting edge for sure. :-)

Interesting idea. I think there's a lot of potential for that approach, and I *don't* expect Notes 8 to make it obsolete at all.

To me, the one piece of Notes that would benefit the most from an AJAX overhaul is the view rendering. We all have our reasonably acceptable versions of this, but none of them are perfect. When I daydream about IBM adding AJAX to Domino, that's what I'm thinking of most often. I know that's not what you're talking about, just over-sharing...

OK, so point me at a good Web 2.0 Ajax view example (doesn't need to be Domino, just needs to look like what you would like to see). Do you want it to replace the view in plave, page sideways like a tabbed table, or what? I need some details before I can see how difficult it would be.

And as for it not being Midas-like, you would be surprised at how much view logic is already in the Midas engine.

First of all, I would bet a round of drinks at sphere that we will not see ajax integration in Notes 8 ... with the focus of the eclipse based rich client overhaul, I think any ajax enchanements to the core product will wait for a future release ...

so, I would add whatever you can Ben. If you could make it so that I could build a caption table in notes, and have a button or form hook that converted it to something like what Rob did automatically, well wow.

I also think Dojo integration is smart .. with Rob's teams work in that area and the rumor of QP8 using it, I bet we see more of it in the future. At least we SHOULD.