Why is iNotes a second class citizen?

One of the more baffling things I find about IBM is how they cater to executives and big companies in so many ways, and then stomp all over them in others.  Certainly, it is true that executives are not the only folks who could use a highly functional web equivalent to their Notes client mail, but many executives are highly mobile and want access to their mail whenever and where ever they may be.
IBM's response has been to go to great lengths to fix up the mail experience, and I have to tell you that iNotes 8.5 is truly beautiful, but they seem to have forgotten that the essence of email experience is not how sleek the Inbox looks, and the clever Web 2.0 bells and whistles, but the email itself.  It is like trying to improve mail service by painting your mailbox over and over in the "newest colors".
I have blogged before about some of the ways that iNotes fails in this regard, but there is a very basic functionality which has been in Notes since before there was a World Wide Web, and that is the doclink.  How is it possible that IBM could screw up something so basic?  Let's see.
Imagine that a colleague in my company has sent a table of important doclinks to me.  Wee are both in Notes, so it travels through the servers and arrives, still in rich text.  If I were in my office to receive it, I would see this:
Original message sent (or received) in rich text in the Lotus Notes 8.5 client 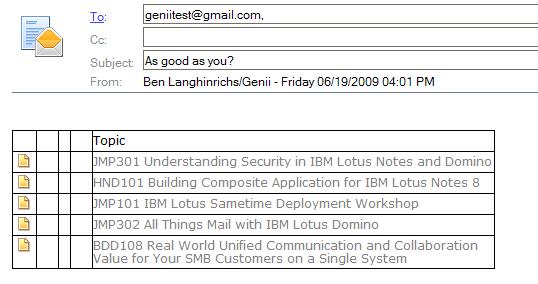 But due to a pressing meeting in Dayton, I am not in my office.  Instead, I read my email (the same rich text email in the same mailbox):
Original message read through the Lotus iNotes 8.5 web client 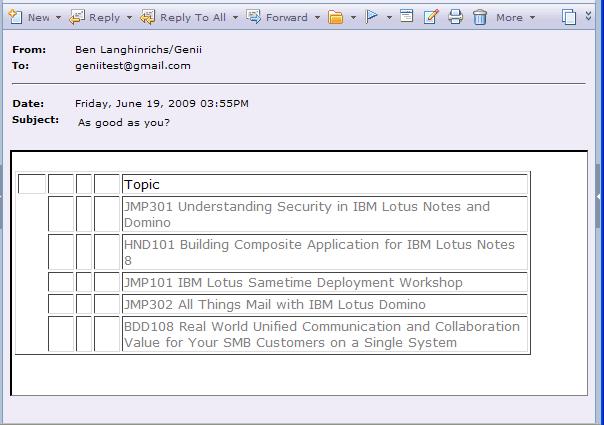 Well, that is highly useful, isn't it?  The doclinks are simply missing.  Gone.  As is the essential meaning of the email.  If I forward it or reply to it, the doclinks won't magically appear either.  They are just gone.
But what really hurts is, if that same email were not being read through iNotes, but instead had been sent to a competitive email system, such as Google's Gmail, or Microsoft Outlook, the doclinks would be there, ugly as sin, of course, but there.  Here is the same email sent to Gmail:
Message sent to Gmail

So, what is the message?  If you are traveling on business, don't keep your important emails in your highly controlled, secure Lotus Notes/Domino system unless you are prepared to take a fully loaded laptop with a Notes client with you.  Instead, send it to some competitor's email system, like Outlook or Gmail or AOL mail or Hotmail or...
Of course, I can't just sit still and accept this, so along with everything else it does, iFidelity makes sure your iNotes experience is as clean and functional as it should be.
Original message read through the Lotus iNotes 8.5 web client (with iFidelity active on the Domino server) 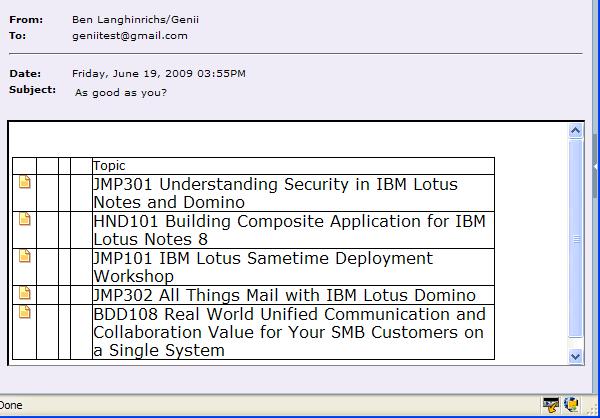 We may not be IBM, but we respect executives and their needs.

Thanks for posting that article. Once the product is gold (very, very soon), I'll make sure you get a copy to try out.

The first time I saw this in Notes 5 I was like "Uh, Work the Web?"

It is downright baffling that this is still a problem 10 years later.

Though we can thank ND6 for making it worse -- "Copy Selected as Table" REALLY exposed the problem.