The rich text has changed, but how?

It is funny how certain areas of functionality become hot all of a sudden.  Recently, there have been a whole spate of people trying out our on-line Review It! demo, which shows the Midas Rich Text LSX doing a red-lined comparison of two rich text fields, highlighting what was deleted and what was added, and that sort of thing.  While a whole bunch appear to be from one person (who I strongly encourage to request a Midas evaluation license to try this out personally), there have been increasing numbers from various parts of the world.  I thought I'd take this opportunity to explain this feature for those who aren't familiar with it.
Two versions of rich text
There are lots of times when rich text is revised, and it would be helpful to know in what way.  Sometimes your boss will send back a document "cleaned up a bit".  Sometimes you will have versioning turned on for an application, but it is hard to eyeball the changes.  Sometimes you need to go back and compare the Help document from ND6 against that in R5 to try and figure out the differences. Microsoft Word has had its variation on revision marking for years, as has WordPro and most other word processors, but Lotus Notes is not a word processor, even if we all use it as one.
A brief example from Notes Help file
The following two examples are taken from the R5 and ND6 Help file, specifically the document on mail options. 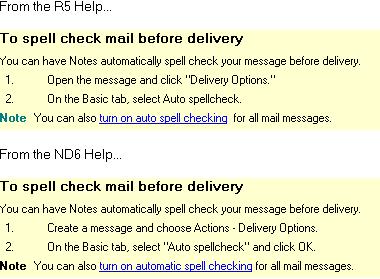 It is apparent from a quick glance that there are differences, but it is a nuisance to determine what they are.  Here is where Midas can help.  First, let's determine what has changed, from the point of view of a reviewer of the Help document who wants to understand each and every change.

and then let's get the public's view.  The public mostly wants to see what is new, not what was deleted, so they get the much simpler version.

Of course, there are lots of changes here, but imagine this is a three page legal brief and only a couple of words have changed.  This sort of revision marking would be even more critical.  I'd show an example, but why not try it yourself?  Then you can see all the options available.  For example, the word Note on the last line is shown as having been modified above, but what was changed about it?  In this case, the color changed, but you could turn off color comparison or changes to bold and italic, for example, if those don't effect you.
Special features for Notes users
Of course, some might ask why you couldn't just copy and paste both versions into Microsoft Word and do a comparison there.  The answer is, of course you could, although it is a lot of extra work, but it also misses some special features that we added for Notes users.  We recognize a change in the URL behind a URL hotspot, or an added row in a table, or a modified doclink.  We recognize when a section has been added between two paragraphs, which Word can't recognize.
Is it perfect?
Far from it.  There are definitely ways to confuse the comparison engine, especially if you have lots and lots of changes in a document.  Sometimes the engine misses a fairly obvious, to you, minor change and thinks a much bigger change has occurred.  Remember that Midas has no way of knowing what you did, the way Microsoft Word does when you turn on revision tracking.  For that, you should use Permanent Pen.  This feature must take two different rich text streams and try to synchronize them, which can be complex.
Can we make it better?
Absolutely.  If you have a need for this feature, and if it fails in particular ways that hamper your ability or desire to use it, why not work with us and help provide use cases?  We work to tune the engine whenever we can, but it is often in response to specific issues customers raise.  Some customers have been using this feature since Notes 4.6x and never had a problem.  Others have specific kinds of changes they make and work with us to tweak either the settings or the engine to get what they need.  How would you like to use this feature?