Once upon a time, continued

Once upon a time (no, not that time, but just a bit later), in another kingdom, there lived a king and queen, surpassing fair herself, truth be told.  This kingdom was peaceful and bountiful, and the palace well tended (and all the children in the kingdom were of above average intelligence, of course), but not all was well with the king and queen.
"Four hundred shekels!?!" fumed the queen.  "Four hundred shekels apiece for a magic carpet ride!  I'd sooner walk."
"Dear, dear,", reasoned the king soothingly. "It would be a dreadfully long walk."
After a good deal of royal discussion, it was decided that the Royal Carriage would be a better choice than walking, and decidely less expensive than the magic carpet, even with the high cost of hay for the horses.  And so, the preparations were made, the handsome and charming younger princes, brothers to the lovely princess, were loaded into the Royal Carriage (handsomely and charmingly complaining about the long trip ahead).  A great many books and royal provisions were loaded up as well, since this was a literate and often hungry royal family, and the trip was underway.  Many adventures were had, and obstacles encountered and overcome, as is the way with such journeys, but eventually the far away kingdom was reached.
Of course, during the course of the trip, the brothers and the king and queen had ample opportunity to discuss many things, such as what they would all like to see in the far away kingdom, how very, very many sheep there were along the way, and what the persistent prince who had called might be like.  The king thought it likely that the prince would be intelligent and interesting, as his daughter was as selective as she was beautiful.  The queen thought that the prince must be quite handsome, but also patient and caring, as no prince with less than saintly patience would have managed to scale the heights of princessly preoccupation for which her daughter was famous.  The younger brother thought it quite certain that the unknown prince must be quite daft, as younger brothers often think even in royal familes, for having chosen this princess, and the older brother kept his counsel to himself.  Thus, the arrival in the far away kingdom found the royal family greatly relieved, but also quite curious.
When the fair and winsome princess saw her family step down from the Royal Carriage, she rushed to them, casting dignity to the wind and throwing her arms around them one by one in turn.  Her smile was a joy to see, and the birds sang in the trees for delight with the happiness of all.  Yet there was something missing.  Where was the prince?  The princess explained that the thoughtful prince had left her to have a few moments alone to greet her royal family, and that they were all to meet in the Public Gardens.
So, off they went, walking along the path to the Public Gardens, talking and catching up as even royal families do when they have been apart.  As they walked into the gardens, the princess cried out with joy, "There he is." and pointed, forgetting for a moment her lessons on princessly decorum. But then, taking a closer look, she stopped, at a momentary and quite unaccustomed loss for words. 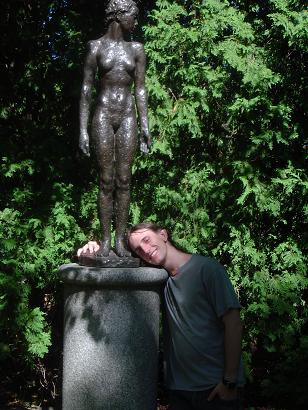 The king stared.  The queen stared.  The two brothers stared.  "Father," asked the younger after a moment, "why is the prince standing with a statue of a naked woman?"

The king thought deeply before answering.  He was aware of the gravity of the moment, since while the prince and princess were currently merely interested in each other, they were of an age where interest could grow and he might have to deal with this prince for some time to come.  The choice of how to answer lay heavily on his heart, but then it lightened, and he smiled.

"We must assume," he explained to his youngest son, but loudly enough to be heard by all present, "the prince is a great advocate of the arts, as is shown by his meeting us while standing with a statue.  We must also assume that he has the utmost respect for women, as is shown by his choice of a strong, solid, if slightly mythological, maiden.  Finally, we must assume that he knows that sometimes a woman deserves to be put on a pedestal, as befits a royal princess."

All eyes turned towards the king, and for a moment the princess, queen and brothers stood silent, unsure how to respond.  Then, the princess smiled and let out a delightful peal of laughter.  "I'm so glad you understand, Father," she said, and laughed again.


The princess ran over to the prince, and they came towards the royal family, where he was introduced all around.  The next couple of hours were occupied with getting acquainted and taking the measure of each other, and each member of the royal family decided that the prince was quite a wonderful fellow, although the younger brother might be excused for still thinking the prince a bit daft for the way he looked at the princess.
After a while, the the prince and princess wandered off a short distance and sat together on an overturned log by the side of the path.  The king looked over at the two young people, aware of the obvious affection they felt for each other, and he sighed a deep sigh.  He wondered what the future might bring, but decided there was little he could do about that, and wandered off himself to find his lovely queen and see if they could find an overturned log of their own. 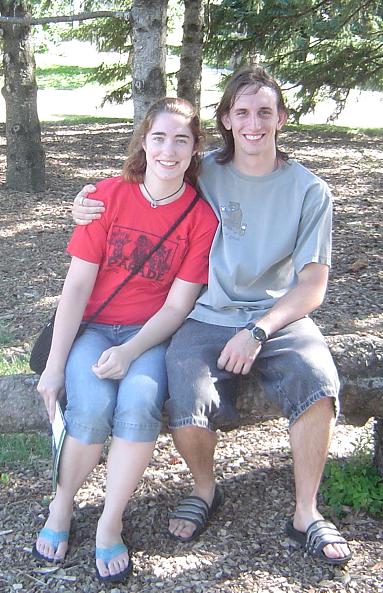 yes, but was there peanut butter?

A valid question, but that was a different prince at a different time. When one is a princess as lovely as the wind, there are oft princes practically lining up outside your door.

The princess is indeed as lovely as the wind. The young prince sounds to be a decent fellow; and appears to have kind eyes. I hope he proves worthy of her affections.

The young prince also hopes to prove worthy of her affections. ;)

As I remember, there was peanut butter, provided by the royal family. And I know how to calculate a tip. :)

There could have been a bit of royal peanut butter, it is true. Welcome to the blog, young prince. May your visits be many and your efforts well rewarded.