Today's fun is looking at nested tables.  Some of you know that I think IBM has a weird resistance to nested table support, so I was hardly surprised when it turned out that the productivity editors don't support nested tables.  What I have a harder time understanding is that they DO support nested tables, sort of.  If you create a nested table in MS Word (in the .doc format) and then read it in the Lotus Documents editor, it renders the nested table quite well.  But if you try to create a nested table, the Create Table action is greyed out.  If you try to copy a table and paste it into a table cell, it fails miserably (and oddly).  But you can edit the existing nested table and save and re-edit and it works fine.
The mystery is solved partly due to a tip from Da Li Yin of the IBM Productivity Editors team (but in the managed beta forum, so I can't repeat it exactly), and partly by looking at the ODF code (one of the great parts of having an XML storage is it is easy to look at).  To get the nested table, you create a frame, using the intuitive Create - Frame action, and then put your cursor in that and create a table.  If you line everything up right (actually, I couldn't manage this manually, but fiddling with the XML worked), the nested table shows like a nested table should.
So, given that the editor CAN support nested tables, and given that it CAN interpret a nested table from an MS Word document 2003 document, it would stand to reason that the integration between Notes and the editor should be at least as good, right?
If you said "Yes!", you either haven't been paying attention or you are an incurable Lotus fanboy.  Let's take a simple example (I use only screenshots since the web rendering might change something.)
1) Simple nested table example in Notes 8
Nice and neat and easy to create 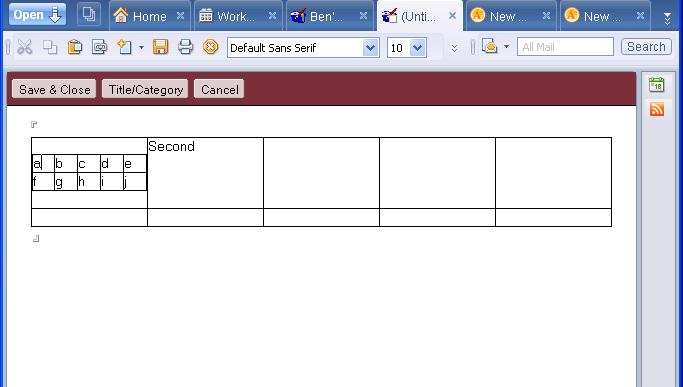 2) Simple nested table example from Notes 8 copied and pasted into Lotus Documents
Well, at least the text is saved, but the nested table isn't and the regular table extends way past the right margin even though it is supposed to fit to the margin. 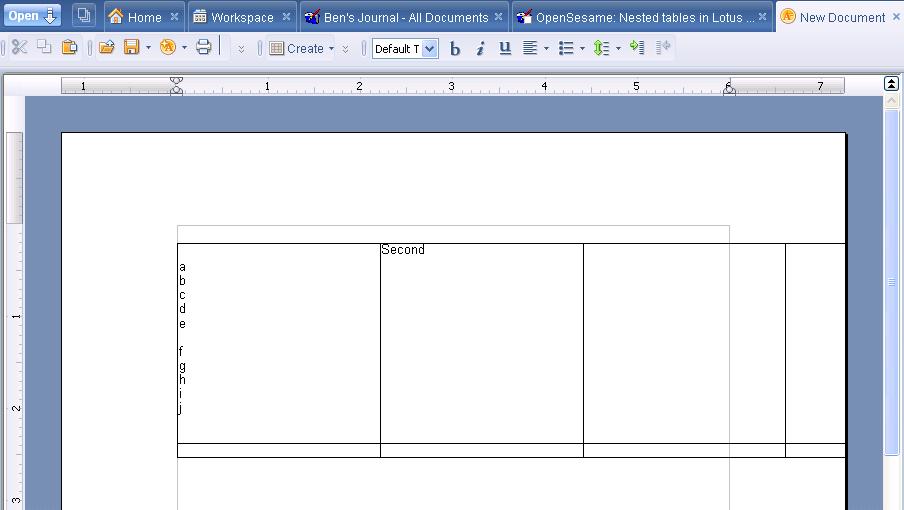 3) Same nested table example from Notes 8 exported by OpenSesame and opened
It isn't exact, but it is pretty close.  The margins work, the nested table works.  The table aligns to the top differently, but I think people could live with this.  But what about the other direction?

4) Nested table example copied from Lotus Documents back to Notes 8 manually
Well, actually, it fails miserably.  There is an error or two that say the following, but nothing gets copied.

5) Nested table example copied from Lotus Documents back to Notes 6.5 manually (out of curiosity)
This was just an experiment, and it actually does better than copying to Notes 8, but it is still a pretty odd result.  The table looks good, but the cell contents are scattered other places.  Overall, not much use. 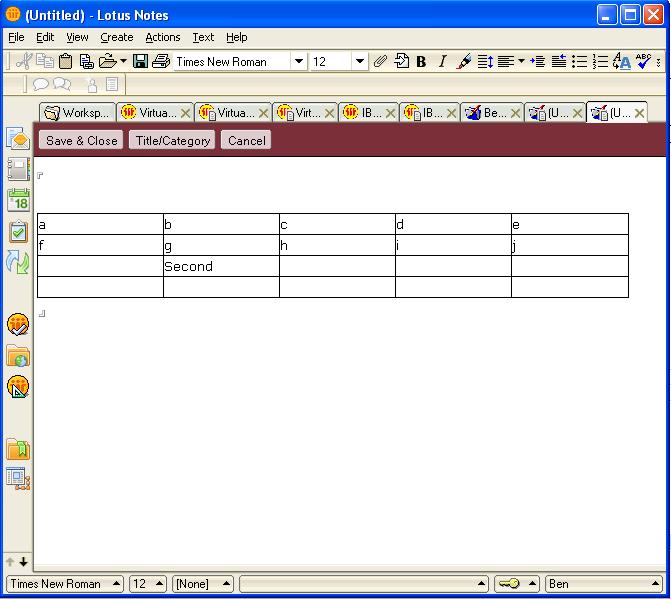 6) Finally Nested table example exported from Lotus Documents back to Notes 8 using OpenSesame
This actually worked better than I expected.  It added a couple of returns before and after the table, but not much was lost in translation.  It certainly beats the manual copy and paste results.

Even more crazy, when you remember IBM still offers SmartSuite, and WordPro for over 10 years has supported nested tables.

I think we should compare the productivity editors to Microsoft Works, it would seem a more fair comparison I think.

I think the Productivity Editors were meant to fit somewhere between the Rich Text Editor in Lotus Notes and MS Word in functionality. But that's the whole point, the more sophisticated Word processors such as Word have too many features that most people don't use or need, so there iss a place for something slightly less powerfull, but simpler and easier to use.

My dissapointment with the Productivity Editors is more because they cannot be used as a default editor in Notes Rich Text fields or as the email editor and secondly because Lotus has not exposed them to Lotus Notes developers so that we can easily generate graphics, and perform underlying functions (like spreadsheet calculations) through the Notes API or natively from Lotuscript or other languages.

I know that is partly the gap that Ben is trying to fill with OpenSesame (and I don't want to detract from the value-add that Genii wants or needs to provide), but I was hoping when Lotus announced the Productivity Editors that they would be much more tightly integrated with the Notes IDE (and Lotus Notes) than they actually are. But then again this is still just the Notes 8.0 release so things could change, and Genii's market niche has always exploited this gap in the Lotus product range.

I have also wondered why Lotus don't simply make an offer for Genii and bundle your many years of innovation with the base Notes/Domino product anyway.

Ben, are we thinking about the same "incurable Lotus fanboy" skulking around the Notes 8 forum? ;-)

What a wonderful characterization...

Carl - Actually, I quite like the productivity editors in most ways, but this is a very sore point.

Ian - One could wonder.

Peter - Some of my best friends are incurable Lotus fanboys, and that's all I'll say.

I think this was an ability not present in the 2.1 release and as far as I know, the Productivity editors are based on the 1.1 version of Open Office.