A few people have asked for a more complete explanation for the "magic step", as one person described it, in my recent video Henry's Dojo SpeedGeeking to CoexEdit in 40 minutes.  For those who don't want to watch the whole seven and a half minutes, here is the 25 second snippet with no audio which just shows the magic provisioning: Show snippet
But what exactly is happening?  All you see is a blank form with the name "CoexEdit AutoUpdate" being saved and magically forms, views, image resources, etc. populate the database.  It happens almost instantly, which is why it was described as the "magic step".  Contrary to another person's belief, I didn't simply edit the video either.  What you are seeing is a new feature in CoexEdit 2.0.  If you designate a database as the auto update db in the NOTES.INI on your server, in a line such as this from my server:
CoexEditAutoUpdateDB=coexedit\CXEIntegration.nsf
then CoexEdit watches for a form being saved with the name "CoexEdit AutoUpdate"  (or a different name I'll show you in a moment).  It doesn't matter that there is anything in the form, just that it is saved.  This save kicks in the auto-provisioning step.  Every design element in the designated auto update database is checked.  If it has a comment, and if the comment starts with the string "CoexEdit AutoUpdate", that design element is a candidate for copying over.  See an example below: 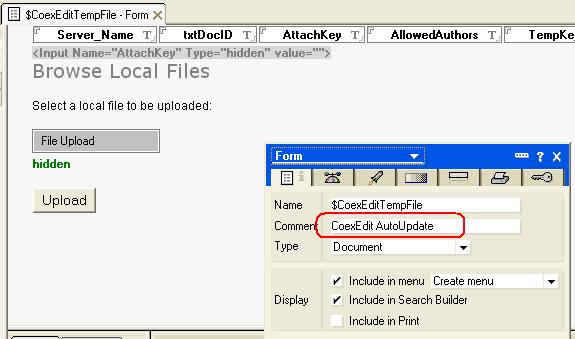 But first, the target database (where the form was added) is checked to see if the design element already exists.  If it does, it is left alone, so it is safe to do this different times and only new design elements will be copied in.  In this way, all the image resources, views, forms, subforms, pages, style sheets, file resources, etc. which might be needed by CoexEdit are added to the target database.  If your company has some additional elements you would like to go into every CoexEdit-enabled database, just add it to the auto update database with the comment starting with "CoexEdit AutoUpdate", and those elements will be provisioned as well.
What is more, if you later want to update some such elements, simply name the form "CoexEdit AutoUpdate Replace" instead.  Any new design elements will be copied in as before, but in a new twist, any existing design element will be overwritten, but only if the comment in the target database still has the comment string "CoexEdit AutoUpdate".  This way, if you modifiy the doclink selection view, for example, or customzie some element, you can just remove the comment and it will be preserved.
But what about the standard template system?  There is nothing in the provisioning which prevents your adding the elements with a designation that they should inherit (individually) from a specific template.  Then, in that template you remove the comments, and after the first design refresh, all of the design elements will inherit from the template as some companies might well want, but the difficult job of knowing which elements to copy in has already been done for you.
So, as a magician never should, I've revealed the secret of the magic trick.  Still, it looks slick even if you know how it works.  Watch the video again.  What do you think?

I think you're using some cunning CGI there