Like taking candy from a baby (Prediction at least half right)

I don't know whether this is exciting or depressing.  Look back at the prediction I made a little bit ago.  I did a bunch of careful tests to see what happens, and what happens is just about what I predicted, at least for tabbed tables.  Sections are handled better, I must admit, which does make sense given their frequent use in emails for reply sections, so the challenge was only half met, I guess.  Anyway, here are the screen prints to show the problem with the tabbed tables.  After forwarding, only the open tab will be accessible to the recipient, and the other tabs are just broken links.
Tabbed table in Notes client (same as I used before) 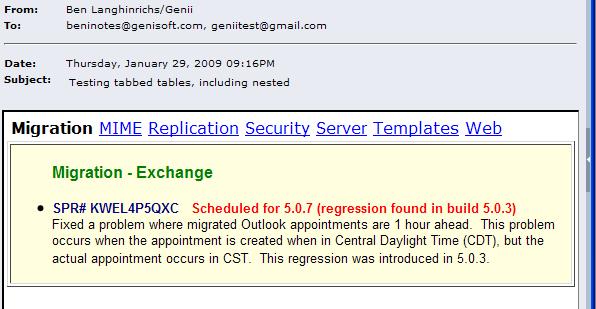 Tabbed table in iNotes after forwarding (links broken, since they require round trip to a server that isn't available to recipient) 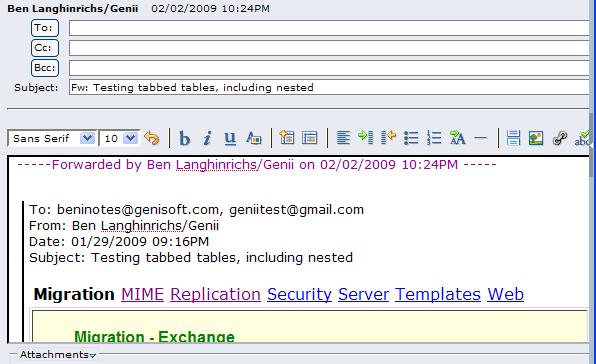 You shouldn't be surprised, the notes client is rife with incomplete innovations that simply aren't fixed or improved upon. There is no one promoting lotus script, mime rendering or a host of other useful features. What we have is an invasion of Java technologists who wish to remake the client in their image.

Ok, a lot of the new stuff is nice and has great future potential, but I do wish they would stop giving us 80% solutions.

There's actually a new field in Notes 8 (it might be in a later version of 7 as well, not sure) called $$HTMLOptions that allows you to control the format of tabbed tables, sections, and outlines when they're displayed on the web.

If you make a computed $$HTMLOptions field with a value of "RowAtATimeTableAlt" it should display the whole table one section at a time rather than a tabbed table. I wonder if that would work with MIME conversions as well?

Julian - It might, and might even be worth trying, but shouldn't iNotes do this sort of thing by default? Even if that works, it means a change to the core iNotes template, which not everybody wants to do. Nonetheless, thanks for the suggestion, because at least it gives people using 8 or 8.5 (although not in 6.5 or 7) a possible solution to this deficiency. If you happen to test that with iNotes, could you post your results?

Wayne - I am not surprised exactly, although I am saddened.

Tried out the $$HTMLOptions thing, but it didn't make a difference. Oh well.

Julian - Thanks for giving it a try. This is nasty, intractable stuff, so be careful when you start to wade in - you might only mean to get your toes wet and then get caught up in the riptide.