Want to play the prediction game with me?

The rules are simple.  Without testing before hand, make a prediction about a MIME rendering problem (in other words, mail getting sent or iNotes mail being read that isn't sent or read well), preferably one I haven't already identified.  For example, I'll make a couple more and then test them (although perhaps not until tomorrow, as it is getting late).  I should point out that two huge weaknesses are part of most of these predictions.  The first is that when a rich text message is shown through iNotes, it does not use the MIME rendering engine, but instead uses the web rendering engine.  The web rendering engine assumes that the Domino server is available, but an email going to another recipient can't assume that the original Domino server is available.  The second weakness is that the various web and MIME rendering engines use virtually no CSS, inline or otherwise, and rely entirely on HTML.  Use those clues in making your predictions.
1) I predict that if someone sets a section title to white lettering on a dark background with one of the various filled in section types, such as one of those shown below, the title will be left white but the dark background will disappear, making it look like there is no title to the recipient.  I predict this will be a problem with both iNotes reading and server MIME rendering (because we already know from before that client MIME rendering loses the title completely). 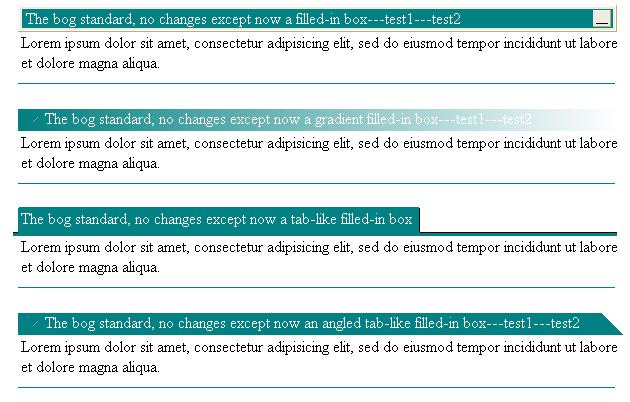 2) I predict that when a  file attachment is included in a rich text message, and that message is viewed through iNotes and then forwarded, the attachment will be missing from the forwarded message, but the broken link will remain.
OK, now it is your turn.  Just close your eyes and imagine some rich text and how it could be rendered wrong if the developer did not think hard about the implications and possibilities.  It is OK in this case to play "gotcha!" by imagining things like the white letters on a dark background that I mentioned above.  It is NOT OK to use predict problems with buttons or scripts or that sort of thing, as most active content is stripped out on purpose.
I will do testing with the very latest production version, either Notes or Domino 8.5.0, and let you know the results of my predictions as well as yours.  C'mon, show me how creative you are!