As one ASW to another, a tip of the hat to Sarah Palin

I am trying to sell software to the Domino masses, but Sarah Palin has loftier goals.  While I do not particularly like or admire her in most ways, my ASW marketing hat is doffed in admiration for her ability to stay in the news.  She is a woman who was the vice-presidential candidate in a losing campaign three months ago.  In the midst of one of the most severe global economic downturns of the past seventy years, she has found ways to stay in the news that boggle the imagination.  See today's CNN headlines, and note three headlines regarding Sarah Palin. 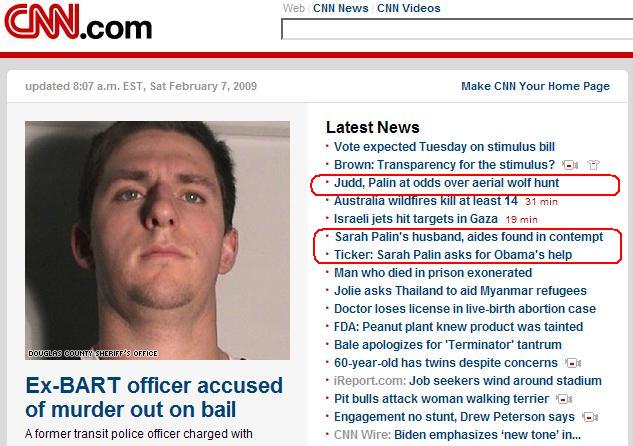 Ben, I have decided to once again respond as if this is my own blog. In case you can't tell, I'm a bit of an ASW, myself. Palin might be a media favorite, but she has never been treated fairly by them, which might account for some of the lack of respect you feel. Imagine if Palin were Obama and doing some of the same pre-election interviews:

Charles Gibbons: Are you sure you are ready to be president, I mean, you have never been president before. If the fate should be in your favor, are you ready for the job?

Obama: I am completely ready to be president. I am ready if the time should come.

Charles Gibbons: When you were picked as the democratic nominee, was there even a short moment when you wanted to say "No, I don't want this?"

Obama: No. I've thought about it. Don't think I haven't pondered completely, but I decided that I do feel ready for the position.

Gibbons: Would it be racist to ask if a man with 2 children to take care of really has time to be president? I mean, racist in that I am not likely to ask a white candidate this question.

Obama: I was asked this question when my wife was pregnant with our first child. I simply responded that I would handle it the same way any other senator does. Granted, they are white, but it is essentially the same thing.

Couric: Obama, there are some very notable people in your own party who say you aren't qualified.  For instance, Bill Clinton.  What would you say to such people who doubt and worry about your qualifications?

Obama:  Well, I've never met these people.  I would like them to meet me personally and judge for themselves.  Not just watch the media coverage and what people think I've said, or twisting my words.

Couric: You know that a political race can be difficult, but were you surprised at some of the things that happened?  You have accused the media of racism.

Obama: People have made comments about the way I dress, and I don't think a white man would have been questioned on his choice of wardrobe.

Couric: But is that really racist?  I mean, sure, we wouldn't question a white campaigner, but white media personalities have been teased about the expense of their clothes.

Obama: I guess you've got a point there.

Couric: You surely knew that the race would be difficult, so were you ready to handle the types of behaviors it brings out?  Were you surprised when people burned crosses on your lawn and e-mailed the "n" word to your children?

Obama: Oh, no.  I mean, yeah, I was kind of upset that I had to explain that to them, but I know that comes with the territory.

Couric: So it sounds like you've weathered this race, but you know that everyone is predicting that McCain will win.  Have you given up yet?

Obama:  Sometimes the results surprise people.  We might not yet know how this race is going to turn out.

Couric: Have you seen the polls?

Obama: (Squirming) We can't know for sure until election day, when every vote is counted.

Couric: (alone to camera) Hmmm.  So, as you can see, he's still hopeful.

McCain: You can put a suit on a monkey, but it's still a monkey.

David Letterman calls McCain on to interview him and greets him, laughing: So have you ever tried to put a suit on a monkey?

McCain laughs back: No, I don't believe I've ever had the pleasure to.

You probably figured I'd at least cover Saturday Night Live, but even they seemed aware of their own biases. Would the above be acceptable? Cause it certainly was when the target was Palin. She was often asked about her plans to stop global warming, but the Republican Party is known to be less concerned about that issue. Nobody ever asked Obama how he planned to resolve the problem that most of our "No Child Left Behind" funding was going primarily to black cities. That would have been a comparatively difficult question for him.