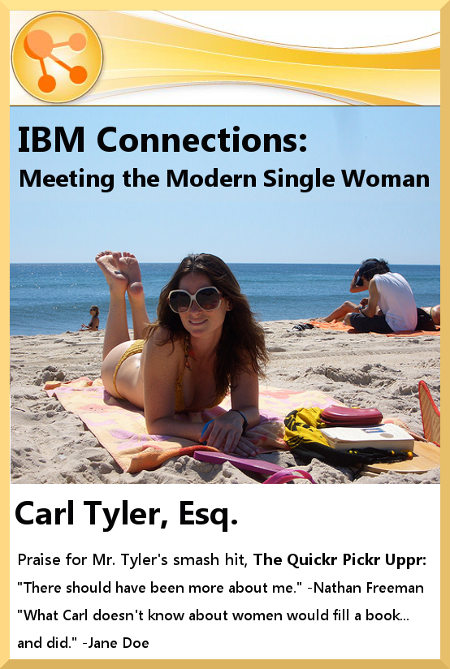 I am mixing a bit of self promotion with a bunch of passion here, so bear with me...
Imagine for a moment that the book shown above were real, and that Carl published it on Amazon, Barnes & Noble and other on-line bookstores. Then, imagine that customers who were thinking about IBM Connections and wanted to see what was published went and did a search there. Do you realize that Carl's book would likely be the first hit when they searched? When I did a search on Amazon in Books for "IBM Connections", the following two books were the first shown:
IBM Lotus Connections 2.5: Planning and Implementing Social Software for Your Enterprise (published in 2009)
IBM and the Holocaust: The Strategic Alliance Between Nazi Germany and America's Most Powerful Corporation (ouch!)
I made this fictitious book cover as part of an upcoming video demo on a new Midas LSX sample database called Instant Ebook, where a non-developer can add all the content, push a button and get an ebook that is ready for publication on Amazon, Barnes & Noble, Smashwords and other such places. But I want to make a bigger point. When you go to all the effort and prepare slides and examples for a session at a conference such as Connect 2014 or EntwicklerCamp or whatever, you could go just a little farther and write a short booklet on the topic. It could demonstrate your expertise in much the way a conference session did. Then, you could publish that on Amazon, and on most IBM Software topics, your book would stand out by the absence of others. It wouldn't need to be a tome or comprehensive, just a booklet with figures and screenshots. You could make it $5, so nobody would be disappointed at the length, but instead would be thrilled at the ebook they could carry with them to a meeting or read on the plane on their Kindle or whatever. It wouldn't make any real money, but the session doesn't either. It would get your name out there.
I'll even make an offer. I will help you create a snappy cover for no cost (unless you need to license an image), and will help with any details. No cost, but I'd like to see books showing up on the on-line bookstores that show there is life in the products we all use. I cannot begin to tell you how quickly it must turn off some potential customers to search for "IBM Connections" and see the vast emptiness, or search for IBM Notes 9 and find nothing at all.
If you would like to try my Instant eBook sample, great. It looks like this, though there are plenty of other ways to publish. I'll even give a very attractive price for any business partner who wants to use Midas for publishing internally, but whether you use Midas or calibre or whatever, consider epublishing as a way to meet the people who don't make the trek to Orlando or London or Gelsenkirchen. 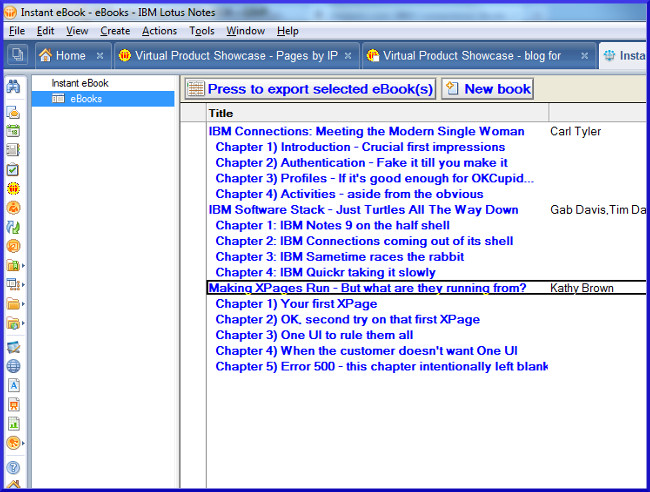 Ben might make your cover for no cost, but a quote from me for your cover is going to be a pretty penny. Start saving. :-)

Yes, Nathan, I dare say that would set one back a bit.

As Nathan's agent I would like to point out anybody wanting to sell millions of copies by having a quote from "Nathan T Freeman" should contact me first so we can get our gaggle of lawyers to start preparing the paperwork.

I'm happy to promote it, but if you don't mind my asking, why aren't you selling it as an eBook? Fear of piracy or not wanting to undercut your own prices? You could sell it yourself in any of the eBook formats. Also, why not a physical book on Amazon, etc.? (Though that is probably the profit margin issue.)

Thanks Ben. For a variety of historical reasons that made sense five years ago, as well as a couple of experiments with ebooks that didn't work out, I haven't sold the three most recent books that way. I recognise that this position is making less and less sense though.