Yellow Bubbles - Stories of the Lotus community by YOU 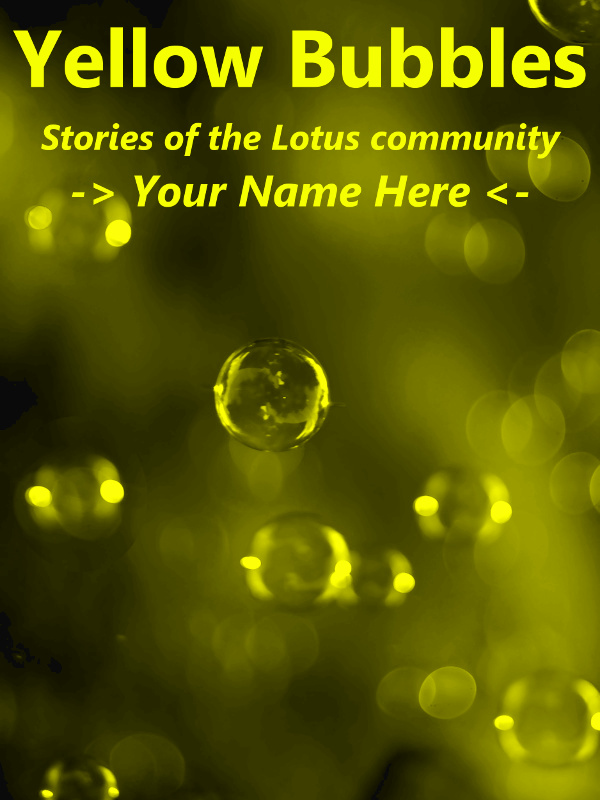 In a comment on my last post, Christian Tillmanns suggested that writing a whole book was too much, but one chapter would be doable, and Paul Mooney chimed in that a history of the Lotus community would be fun. What if anybody in the Yellowverse who was interested tell your story/stories about what the Lotus community has meant to you. No particular rules, tell the good, bad or ugly. Anything that would be fun for the rest of us to share. I would then publish them on Smashwords for free (and on Amazon and Barnes & Noble for the minimum, $0.99, if people think that is a good idea). Because each is a small, individual project, there can be as many or few as people like, and they can show up whenever they show up. They can be a couple of pages or twenty pages or five hundred pages. Doesn't much matter. Bytes don't weigh much. By the way, I use the term "Lotus community" on purpose. I know it isn't attached to the products anymore, but neither are many of you. The community grew under the name Lotus, so I think it fits.
Obviously, from the very start, there is no money in it. The only goal is capturing some of what the Lotus community has meant to us over the years. No pressure, no need to sweat deadlines. I would be editor, because somebody has to read the damn things and find typos and such, as well as make sure the formatting is ready for publishing. Any tiny trickle of money that came in would go to the coffee fund to make sure I was awake enough to keep doing this stuff.
Anybody interested?

What a cool idea, Ben! And a generous offer to deal with publishing this project. I like the idea of using "Lotus Community" as there is, indeed, a rich history behind that term and it will always have meaning for those of us who grew up with it.

Personally, I think I am a poor writer of things other than technical documents, but I'll take a stab at this and if it isn't too tedious, I'll pass it along :-)

Cool! But don't be too hard on yourself, or self-censor too vigorously. These are just stories told around the virtual campfire by a bunch of geeks. Worry not!

That's a great idea! My writing fingers are starting to itch. :-)

I am trying to remember the name of the lady who was one of the earliest founders of the Lotus Partner forum who wrote up a great article about how it was set up as an "intentional community". Would make a great chapter if it can be found and she wants to contribute it.

Let's crack on then.

How about the story of Lotus Foundations? At least my version?

Christian - It's your story, tell it the way you want.

Oh, by the way, you could do two main parts. The longs and the shorts. The later would be those short stories we all lived. Like when the customer's IT boss called that the Domino is down and we discovered that it wasn't down at all, but very busy, because that very IT boss had send a oh so funny PowerPoint file to her whole address book. Smirk.

Christian, you should export it to .doc, .docx, .rtf, .txt or copy it into a Notes document or send it through email. I can't read Pages format.

I *think* it has to be a historical book. This is my 2c only so please feel free to ignore. Starting with someone like Carl Tyler and others that were there at the start, onto the big stories that happened each year, where everyone can jump in. Since 2002/3 a lot of IBM/LOtus' history is documented in the blogs, be it good or bad.

Alan, I haven't heard from Carol Anne in a while, but might ask her about it.

Paul, It doesn't have to be or not be anything. Certainly, blogs have covered lots of material, but I'm not worried about somebody repeating something they wrote on a blog in 2004. Who cares?

As for structure, it is likely to be structured two ways. Each individual person's story/stories will be in a separate book so they can start at the beginning or the end or talk about one aspect or whatever. In addition, I may well make a collection of all the stories which I will put together in some semblance of order. I may even publish it periodically so that it will get bigger as people add stuff, and I may add links between related stuff for example. No hard and fast rules here. It's the digital age, so I could republish it everyday if I liked. That's part of the fun.

Of course, all this depends on anybody actually writing anything.

Jolly good. Well, bring them on. Write whatever you want to write about, whichever aspect of the community inspires you, or whatever bit of history you are fond of, or whatever. I majored in Latin American studies in college (useful stuff, that!), and some of the Latin American authors would write books where you could rearrange the chapters anyway you liked. That's what I'm picturing.

I second Ray - sounds like fun. Not sure I have anything to contribute but I'll have a ponder...

I'll have a look through the old blog and bookshelves here and see if there's anything that jumps out. PICS! If we could include pics (with permission of anyone in the pic, of course), that might be wonderful. For example, did Bruce Elgort ever have hair? I don't know!

Joe, absolutely pics. That's a great point. Also, maybe somebody could do a Backpacks of Lotusphere series of shots, as I know there are a few people who talk about having them all.

I have a lot of fond memories of the community, Lotusphere, etc, but not sure that I could put it in words. I still drink out of a coffee mug from The Turtle with the weightless dog on it!

Genius Ben! Indeed no shortage of anecdotes and stories from all of us. Getting it down and written may be the hard part. Off to look at google dictation or whatever will do that best.

Keith, don't worry too much about the writing. I'll be editing everything and the audience will generally be the rest of us in the community, and we are a generally forgiving audience. The biggest goal is to get the stories down and shared.