As some of you may have heard, I am working on a project to put out a rewritten and extended version of my sci fi humor serial, Judd Falcoln: Missionary to the Stars, as a series of Youtube videos. It will not be a script or movie, but it will be more than a simple narration of a story. Dialogue will be read by volunteers (that would be you, mate), and faces might be used as well in a manner of speaking. What I need are volunteers who are willing to record themselves reading expressively the lines that I send. Anybody who is comfortable with it can also record it as video (on a smartphone if nothing else), but your face may by emblazoned on a rocket that shoots up while you talk, or superimposed on a planet or whatever makes sense (ok, none of this may). You might be animated (cartoon style) or not. If you still don't want your face used at all, voices are certainly welcomed, though they may be represented by something, such as a waddling penguin.
If you are interested, we'll start with a few smaller stories to work out the video techniques. Think of them as auditions if you get a buzz out of being nervous, but I am thinking of them more as a chance to fit characters more to your voice. Drop me a line if you are interested. Warning, if ukulele music is a trigger for you, turn the sound down when you watch the videos. 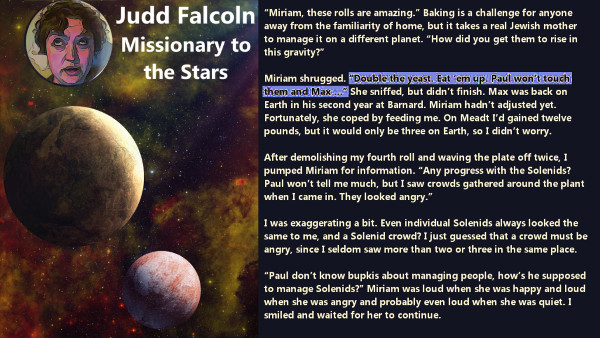