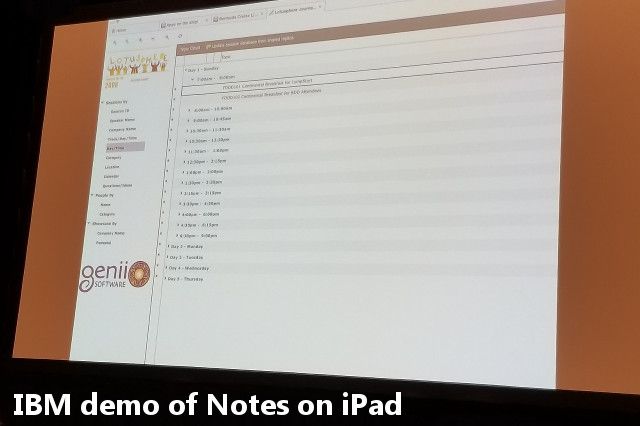 Ever since I heard about IBM showing Notes running on an iPad at IBM Think, I've been thinking about the pros and cons. There are cons, of course, such as my having to port the Midas LSX to iOS, which should be interesting, but which I will do. I've also heard a certain amount of grumbling that Notes apps on an iPad are going to be far less attractive than native apps, or that performance is likely to be slow.
But I think those worries miss the point. I am a fairly hardcore developer, and I still have little desire to write iOS native apps. I have even less desire to negotiate Apple's App Store. I don't own any Apple devices, so I don't even know what the App Store is called. But I've heard plenty of stories. The thing is, very few companies I deal with have developers on staff who are more hardcore than I am. There are some, but the vast majority are happenstance developers. This is particularly true of Notes developers.
But what if that is an advantage? Suddenly, Notes developers can write apps that run on the iOS devices (or at least the iPad) which people want to use. As far as I can tell, they don't have to learn any iOS specifics. They don't have to learn to navigate the mysterious Apps Store and Apple's capricious ways.
They just write a Notes app and replicate. Will it be fantastically pretty? Maybe not. Does any company I know care much at all whether their apps are fantastically pretty? Not a one. These are businesses. They want to get business done. On the client end, they aren't terribly concerned about performance unless it absolutely sucks. They aren't all that concerned about "how native" the app is, so long as it is visually consistent enough that users aren't confused. In other words, Notes apps are fine.
And they will work on the iPad without a day more training for their Notes developers. Think about that.
In fact, I think that might be compelling enough to get companies to switch if they just get an idea of the relative ease of making simple applications with Notes. Yes, I mean switch to Notes. I can see some departments and some companies doing that, and I haven't glimpsed that vision in a decade.
Now I just have to get Midas running. I might even have to buy an Apple product for the first time.

I don't know what it would take, but if they changed the input components to be more "bootstrap" like an application could be made to resemble a browser app rather than a bona fide iPhone app. The same could/should be done for windows tablets.

It will be interesting to see how they decide to move forward in terms of consistent UI with Notes on Windows vs. consistent UI with iPad. Even more so if they eventually do an Android build, which should be doable given they have a Linux build. My understanding is that they are moving toward more consistency with the iPad look, which would make it more possible to have Notes apps that looked like iPad/iPhone apps, but that is more of a "I think I heard" than anything else.

I'm sure many in the community will be *extremely* happy to hear you're looking at extending Midas LSX following the announcement. So many third-party tools have fallen by the wayside as partners move away from Domino and give up supporting them, so your continued commitment to Notes and Domino is very welcome. I agree, it could encourage some organisations to build more on Notes because of the benefits of RADD for desktop and iOS.

As many, I haven’t been as excited about Notes and Domino in (too) many years. HCL clearly wants to get the ball rolling again. The Domino Apps on iPad (I would, like you, have preferred calling it Notes apps on iPad) is pretty neat. At the moment it’s almost a 100% lookalike to Notes on a desktop. They are going to support native controls where possible (e.g. a native date picker, insert photos from camera or photo-library, keyword dialogsboxes iOS style), and even add native support for GPS. Extra additions to Lotusscript, and formula language will be added too.

As for devices: iPad support for V10. iPhone and Android coming later.

Re. The way an app looks: it your job, as a developer,to spend time to make an application look nice. And it’s perfectly possible to do so, with the ‘classic’ client.

Can’t wait to get my hands on it!

The whole "many third-party tools have fallen by the wayside as partners move away from Domino and give up supporting them . . ." statement is exactly why a lot of smaller businesses have left the IBM Notes/Domino world. They don't use, for example, Salesforce, but a smaller CRM. They left Domino because there was no support for their CRM. And they will not be back, no matter what happens in this space.

The faithful might be excited, but the companies that paid their money and got nothing for it have left for the only other game, Microsoft. Getting them to come back will be an impossible task.

My small company of 40 users, are longing for an update or new CRM on Domino ( third generation sinne 1997). IBM Notes on all platforms, on pads, iPads, mobiles, fullt integrated with Connections!

Gregg - Would be more compelling an argument if I didn't hear from so many companies who feel so dreadfully let down by SharePoint.

Rolf-Thore - If someone builds it, you will come is what I am hearing.

I see developers quite excited about this but what about the existing customer base?

I have not wrttien a Notes client application in 10 years and I thank Stephen Wissel for his “xagent” article on non rendering xpages spitting JSON via SSJS(REST).

Rami - If you don't have or want Notes client applications, it won't much matter to you. Like most things with Notes/Domino, this is an option not a requirement. I simply like that the option will be there, and I know a number of companies who still have far more Notes client applications that they wish they did. For them, not having to create a new mobile app but instead re-use an existing app means they won't need to spend a lot of money they don't want to spend. For others, it may be appealing to have a simple low code solution with forms and views and @formulas that they can run on both desktops and mobile devices.

I am currently sitting at a customer who you know. Everyone knows. They are moving to O365 and this won't change that. BUT it has planted is the idea of not rewriting some of their business critical apps on another platform and using this (maybe in combination with ICAA) to mobilize these apps. This may even make the customer renew (or change out to another scheme) their licenses if this comes to fruition.

As with everything IBM does though, it's about time-to-market. If this doesn't become available before the customer is finished planning the move of their apps (or there is no concrete ETA within a few months) then, at least for this somewhat large customer, it could be a swing and a miss.

It has given customers pause for thought though. And that doesn't happen very much with Domino these days.