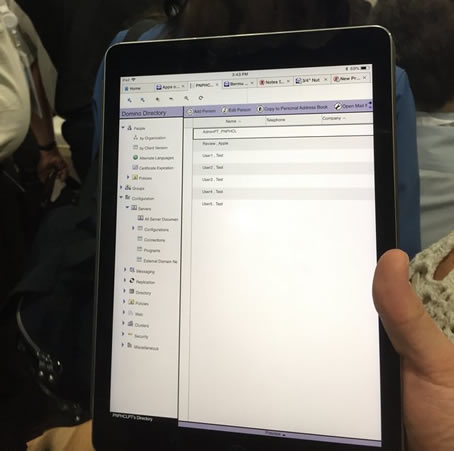 Time: The very near future.
Place: Megacyclopilis Inc. offices
Voice (on an intercom): Tabitha!
Tabitha: Yes, sir? Could we not use the intercom, sir? It's 2018. Besides, you're only in the next office.
Voice (whining a bit): But I like the intercom.
Tabitha: Very well, sir. What can I do for you?
Voice: Our sales force needs to move with the times. I've ordered 5,000 iPad Pro tablets, I need you to put together a meeting, all our top people. We need to talk about how to get SlickSales over onto those iPads pronto pronto. No expense spared. No time to waste.
Tabitha: But sir, SlickSales is a Notes application, and we have Notes 10...
Voice: What! Is that a problem? I knew there'd be a problem. I don't care what it takes....
Tabitha: Excuse me, sir. I meant that because it is a Notes application, it will run on the iPad Pro as is.
Voice: What's that? You mean we don't need a big project or to spend a lot of money?
Tabitha: No, sir. It will run everywhere. It's a Notes app!
Voice: Well, then, we don't need a meeting, do we, Tabitha?
Tabitha: No, sir.
Voice (somewhat disgruntled): Harrumph. Well, Tabitha, can you... get me some coffee?
Tabitha: No, sir. That's not my job. And may I say, sir, it is inappropriate for you to ask.
Voice: Yes, I expect you're right. But if we don't have a project and we don't have a meeting, I guess I can get my own damn coffee.
Tabitha: Yes, sir.
Voice: Would you...?
Tabitha: Two sugars, no cream, sir.
Voice: What would I do without you, Tabitha?
Tabitha: I don't know, sir.