You might want to change your Outlook: Margin Madness

In response to a recent post, Chuck Hauble asked:

How do I fight the argument that if I want full fidelity email I will just switch to Outlook, instead of paying extra to fix something broken with Notes

While there are various answers, Chuck's response prompted me to post this, the first in a series of posts about how MS Outlook is also broken in its email fidelity.  The choice is not between a broken Lotus Notes and a working MS Outlook, but rather between a somewhat deficient Lotus Notes that can be improved with iFidelity and a somewhat deficient MS Outlook that can't (at least until I or someone else is motivated to write an iFidelity for Outlook).
It may surprise the somewhat insular Lotus Notes/Domino community to find that Microsoft Outlook/Exchange users are equally, and perhaps more, vocal about email fidelity issues.  The vast majority of companies using Outlook/Exchange are still using Outlook 2003, which has numerous problems, because Outlook 2007 is widely acknowledged to be even worse.  The issues are shockingly similar to those with Notes.  An HTML email received and rendered reasonably well is garbled in nasty ways when replied to or forwarded.  An email create in Outlook is garbled when sent to GMail or Lotus Notes or even another Outlook user.
But let's see some specific examples.  (IBMers will likely be relieved to see me posting nasty screen shots of Outlook for once)  For this first post, I'll use MS Outlook 2003, as that is still the most widely used version of Outlook.
A fairly straightforward formatted HTML email received in MS Outlook 2003 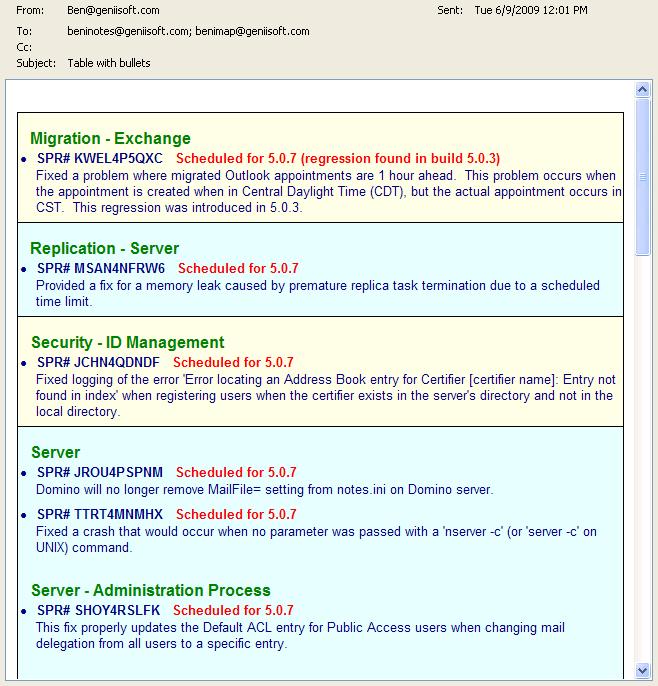 That same email forwarded to GMail.  Note the rapidly rightward movement of the margins in subsequent rows. 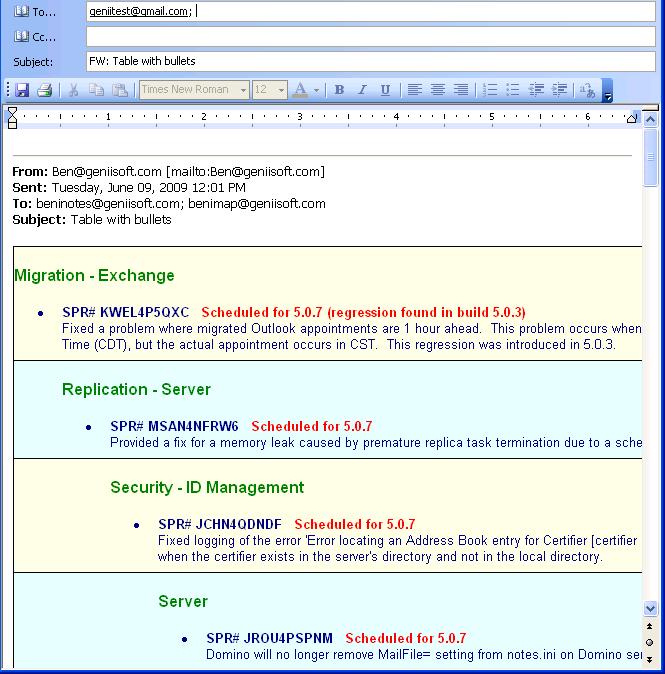 That same email received in GMail.  Note that the bullets get garbled, the fonts are different, the spacing is wrong, and the margins are even worse 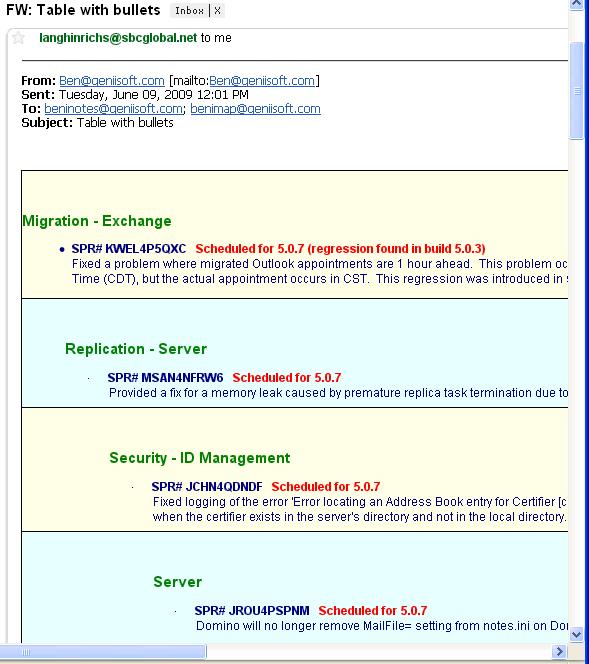 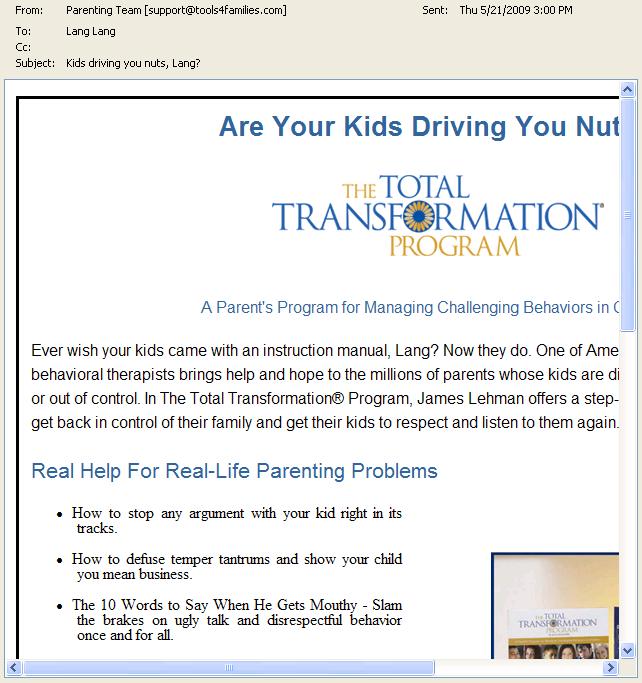 That same email replied to.  Note the weird wrapping of the bullets and the missing line spacing. 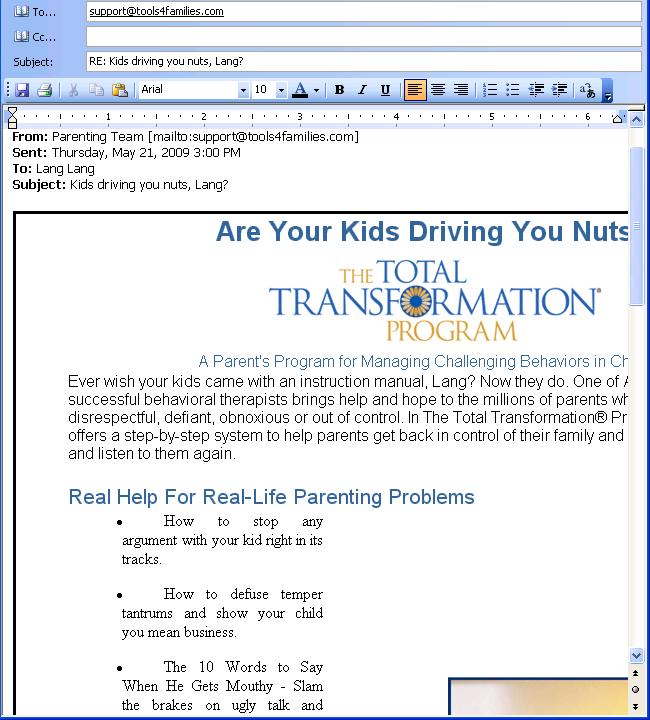 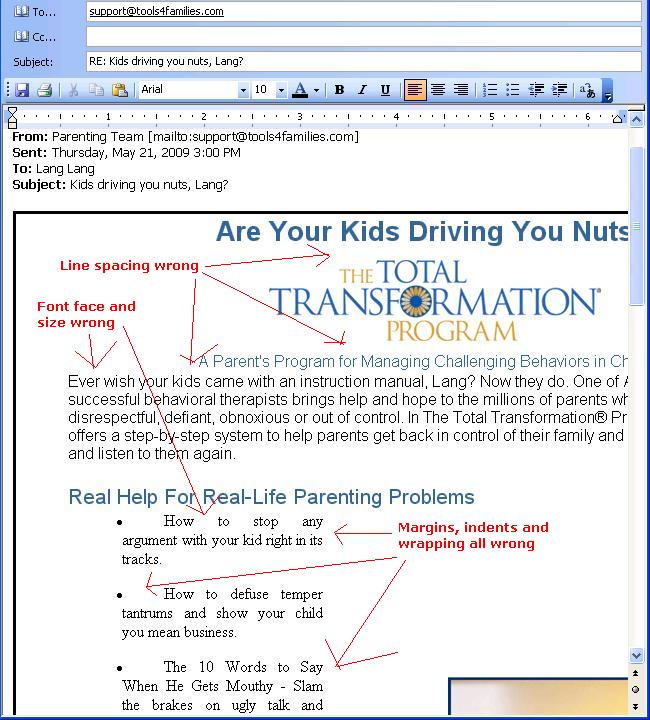